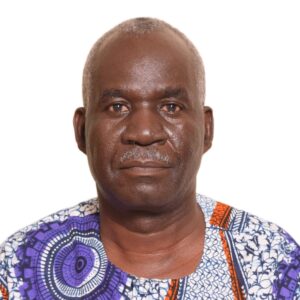 James is a retired high school teacher after serving for a period of 33 years, 16 of which he was the Senior Principal of Joel Omino Secondary School, the Pioneer ESD ( Education for Sustainable Development) in the Republic of Kenya.
In 2010 James undertook a training in Israel under the sponsorship of MASHAV ( The Agency for International Development Cooperation) among 25 others from Kenya. On return, he embarked on the path of implementing the principles of ESD in the school and other institutions. This effort bore fruit when in 2016 he was nominated by the Ministry of Foreign Affairs, the State of Israel, to represent MASHAV at a special event hosted by the Prime Minister Benjamin Netanyahu and attended by among others over 15 African head of states, at the United Nations Headquarters in New York USA.

James believes that ESD is a way of life as such he continues to tell educators, leaders, the youth and women that “ Kenya we have a chance to wake up “ to bring up our society through education that is by the “Head, Heart and Hands” He is a National Master Trainer of ESD in Kenya.

Early 2017 he teamed up with Eyal Bloch of David Yellin College Jerusalem, Israel and together they founded TOP ( Technology of Peace) an organization that has experienced an exponential growth with this short period. We have trained several young graduates who are already making impact in job creations, women who are transforming their societies by tapping their Potentials and this year we opened 13 TOP Centres in Kenya, which are offering trainings to different cadre of their communities in areas of simple technologies that provides local solutions.
James and Wife Linet together with their grown up children live in Kisumu, Kenya by the shoes of Lake Victoria.

TOP Kenya Founding Members are 6 NGOs and companies that have gone through Education for Sustainable Development (ESD) training and wish to continue their efforts. They provide solutions to challenges such as unemployment, hunger, water, violence, une prisoners’ reinsertion, microfinancing and more. Here is a very short sample of their activities and below more details.